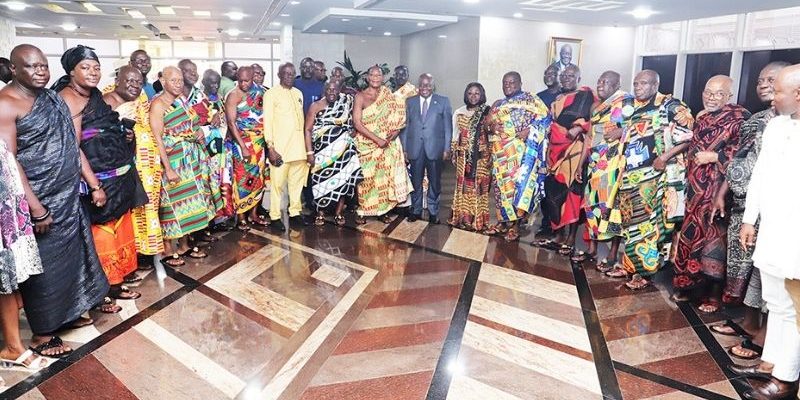 . President Akufo-Addo with a delegation from the Ahafo Regional House of Chiefs after a meeting at the Jubilee House 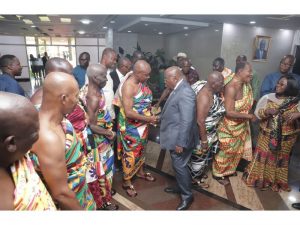 President Akufo-Addo interacting with some of the chiefs from the Ahafo Regional House of Chiefs at the Jubilee House.

The chiefs of Ahafo Region have vouched to work hard to maintain the region as the third force for the ruling New Patriotic Party (NPP) in the country. The intention was made known by the President of the Ahafo Regional House of Chiefs, Nana Ansah Adu Baah II. He had led the traditional authorities in the Ahafo Region to pay a courtesy call on President Akufo-Addo at Jubilee House, yesterday, Wednesday, May 11, 2022.

Addressing the President, Nana Ansah Adu Baah II first congratulated him on his re-election, indicating that to Nananom (chiefs) the victory reflected the level of confidence Ghanaians had in the programmes and policies of his government.

He had earlier commended the President for heeding the call of the people of Ahafo and creating the region, indicating that marked the beginning of goodies to the area.

Nana Ansah Adu Baah II seized the opportunity to outline some issues they needed the government to address. Among others, he mentioned that the greatest challenge confronting the Ahafo Region was the poor road network, and appealed for its improvement.

He also appealed to the President to upgrade the Goaso-Tepa road to asphaltic surface, to depict the status of a highway, and the capacity to handle the fleet of heavy trucks that ply the road.

He further mentioned several other roads in the region that needed some construction works, including that of Hwediem-Kenyase, Yamfo-Bomaa-Tepa, Bediako-Kasapii and Bechem town roads.

Away from roads, Nananom also appealed to the President to consider indigenes of the Ahafo Region when making appointments to the boards of state institutions. The chiefs also requested for a stadium for the Bechem football club, and school buses.

President Akufo-Addo, in his response, acknowledged issues of roads across the country, but said his administration had performed tremendously well in fixing several of them year after year.

However, he admitted that for lack of funds, all poor roads could not be constructed within his tenure, but added that the government was doing its best. Speaking specifically on Ahafo, President Akufo-Addo said that per the programme of the Roads Minister, the asphaltic work of the Goaso road would take place this year.

Apparently, the Executive Secretary to the President, Nana Bediatuo Asante, had got in touch with the Roads Minister, who was not at the meeting, for further information. He then informed the meeting that Mr. Kwasi Amoako Atta had told him that a total of 58 road projects were ongoing in the Ahafo Region, out of which 38 were active, and that the remaining 20 would have to be reactivated.

He listed some of the active projects as the Bechem-Techiman-Akomandan reconstruction, upgrading of Nobekwaw to Sunkore road, upgrading of Goaso town roads, including dualisation.

President Akufo-Addo raised concerns on chieftaincy conflicts in the country. He was worried that the government was compelled to spend public resources to solve these conflicts, through deploying security and other measures.

Apart from the public disturbances, President Akufo-Addo told the chiefs they would be shocked to know the monies the government spend on chieftaincy conflicts, and appealed through the Ahafo Regional House of Chiefs to the rest to end those disputes.

He cited the out-dooring of the Kwahu State Book, which set out their genealogy, and urged all house of chiefs to emulate. Speaking in the Akan dialect, President Akufo-Addo was of the view that, “the codification of the royal lineage is something every region should do, so that succession issues will not be a problem.” 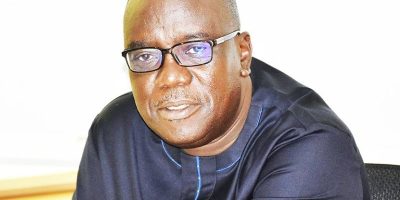 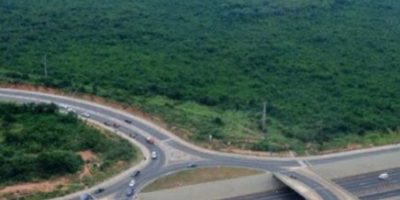 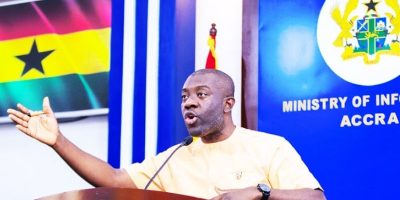