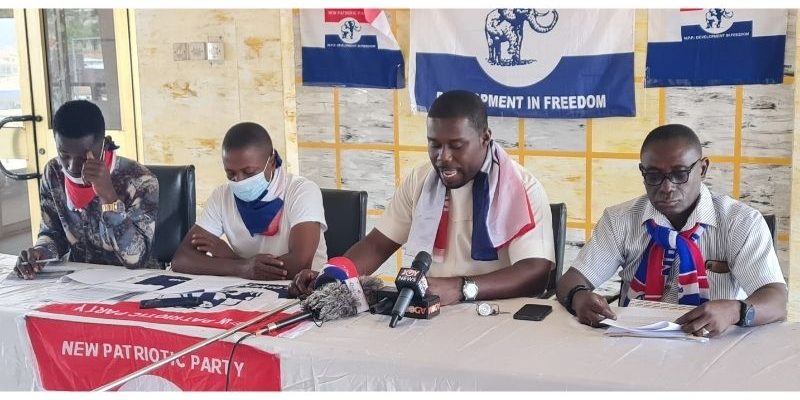 A youth group of the New Patriotic Party (NPP), Ashanti Patriots Movements, has drawn the attention of the leadership of the party to what it terms “a dangerous trend of breach and abuse of the Code of Conduct by the National Executives Council (NEC) in July 2021.

The group, expressing solidarity with suspended communicators in the North, said the suspension of the communicators, was a clear breach of the Code of Conduct, describing it as unfair vilification of supporters of the Trade Minister.

Mr. Emmanuel Osei, Leader of the group, noted at a press conference on Wednesday, that the trend, if not checked, would hugely affect the fortunes of the party and its resolve to break the eight-year jinx at the 2024 elections, and called on the NEC to address the issues in a proper manner, as demanded by natural justice.

Mr. Osei explained that the three, who had been suspended on grounds of allegedly supporting Mr. Alan Kyerematen, were being accused of breaching the party’s codes, when named members of the party had also breached the party’s Code of Conduct with impunity without any sanctions.

The Ashanti Patriots Movement also condemned what it called stage craft exhibited during the recent Annual National Delegates Conference and the last Akwasidae at Manhyia Palace in December 2021.

The group condemned the Ashanti Region NPP Members of Parliament (MP) Caucus, who were allegedly used for the said stage craft to breach State Protocol to show solidarity with the Vice President at a time the President had already taken his seat.

The concerned youth group described the move as unpatriotic and undemocratic and called on the MP caucus to render an unqualified apology to Asanteman and Ghanaians as  a whole for the impunity and disregard for state protocol, tradition and culture.

They also cautioned the NPP MP Caucus to take a cue from the hanged Parliament and learnt not to impose any person the party because he would be rejected through democratic means under the supervision of the Electoral Commission. Ashanti Patriots Movement has, therefore, called on the General Secretary of the party to strictly apply the code of conduct without fear or favour

Meanwhile, Agnes Ansah also reports that a youth wing of the New Patriotic Party (NPP) has called on the National Executives of the party to put a stop to the selective application of the parties’ Code of Conducts to people who flout its rules.

The group, known as the NPP Youth for Victory 2024, was advising the executives to apply the rules equally, or risk being removed in the next primaries.

The group, whose aim is to pull resources together to ensure that the party breaks the eight come 2024, indicated that an electoral victory for the NPP was an automatic key to ensuring continuity in the development of Ghana, and would, hence, not mince words to speak about issues that would not let this vision become a reality.

“…This must stop before we start a campaign to ensure that no national officer is retained. You are therefore kindly advised to play by the very book you have written. For us, victory is all we need and we will go at all ends to make sure it does not elude us.”

Giving instances where the rules have been bent to favour some members within the party at a press conference in Accra on Monday, Leader of the group, Jerry John Campbell indicated that prior to the party’s recent National Delegates Conference, the party issued a communiqué stating the do’s and don’ts at the conference some of which were the ban on the wearing of T-shirts and mounting of bill boards of a candidate who has shown interest in contesting for the flagbrear position.

Mr Cambell disclosed that supporters for the Vice President, Dr Mahamadu Bawumia, wore some branded T-Shirts while others mounted billboards at the conference grounds and yet the executives did not met out any punishment to them.