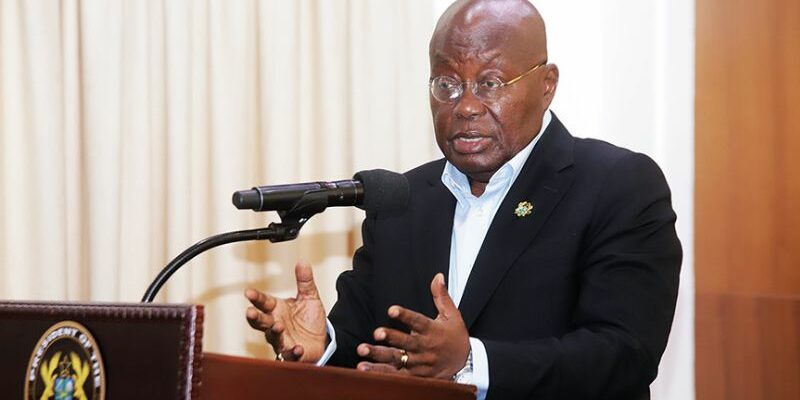 President Akufo-Addo speaking to the delegation at the Jubilee House

President Akufo-Addo has complained bitterly about black market trading of forex in the country.

According to him, the situation where their operations drive the supply and rate of forex transactions in the country was unacceptable, and has since indicated that efforts should be made to collapse that business.

“As you hear public commentators and commentators from the Bank of Ghana itself say it is still the black market that is driving both the supply, as well as the rate of our foreign exchange transactions.

“That, to me, is completely unacceptable, and we have to find a way to work together to drive the black market out of business,” President Akufo-Addo stated.

The President said this yesterday during a meeting at Jubilee House with the leadership of the Forex Bureau Association of Ghana.

At his insistence, the meeting was part of the government’s consultation with key economic stakeholders to discuss the issues affecting the economy, and the way forward.

President Akufo-Addo expressed worry about the activities of the black currency market, saying that they had significantly contributed to the weakening of the Cedi against the major trading currencies.

President Akufo-Addo began his remarks by narrating what inspired the creation of the forex bureau in the country.

However, he opined that somehow, that initial motivation for the creation of the forex bureaus has still not materialised.

“The initial impulse for the creation of Forex Bureaux in Ghana was that at the time when our economy was opening up and liberalising, there was the need to find a mechanism for putting an end to black market operations on the country’s currency.

“That was the initial impulse, so we will have these forex bureaux regulated by the Bank of Ghana to make access to foreign exchange in a regulated and controlled manner easier. Unfortunately, somehow, this initial motivation for the creation of the forex bureaux has still not materialised…,” he stated.

Meanwhile, he urged the association to lend support to the government’s efforts to tame currency speculators who had contributed to driving down the value of the Cedi.

CURRENCY DEFICIENCY IS NOT NATURAL

The President of the Forex Bureau Association of Ghana, Mr. K.T. Dadzie, told President Akufo-Addo that the forex rates started coming down with the announcement of the meeting between forex bureaux. Based on that, he concluded that the currency depreciation was orchestrated.

He noted that the past three months had not been easy for operators of forex bureaux, as well as their customers.

“With the announcement that we were even meeting yesterday, the rate started coming down. It means it is not natural; this has all been done by people’s speculation and trying to make a windfall out of the situation that we are in,” he said.

According to him, the association did not have control over the forex market beyond what the regulator, the Bank of Ghana, determined.

“We have been in this business since 1988. We have had turbulence, but this is a bit tough for all of us. We have gone through all that happened, but we tried, and we survived, and I know this too shall pass.

After the initial remarks by the Association and the President, the meeting went into a closed-door session.

The Cedi has since the beginning of the year witnessed a steep fall in value, depreciating against major currencies.

This is due to several factors, including the rebound of the strength of the US Dollar, investor reaction to credit ratings downgrade of Ghana’s economy, the non-rollover of maturing bonds by non-resident investors, high crude oil prices, the loss of access to the external market for borrowing, as well as speculation.

National Security begged CJ to be harsh on galamseyers