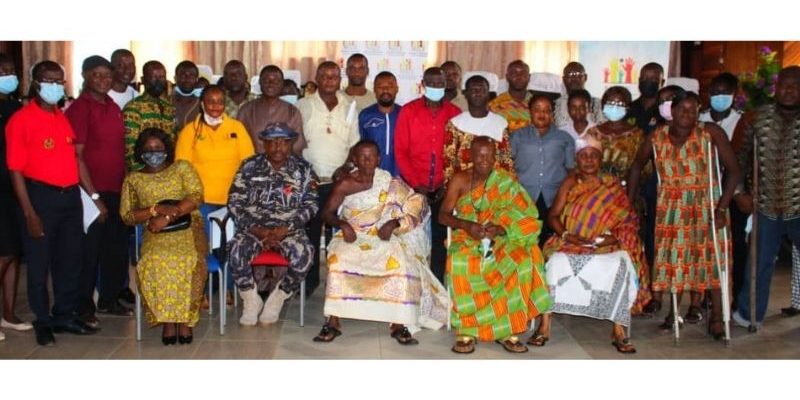 Stakeholders who participated in the workshop in a group photograph

Mr. Sylvester Yaw Asamoah, Obuasi Municipal Director of the National Commission for Civic Education (NCCE), has cautioned Ghanaians against complacency and to team up to nip violent extremism in the bud, to ensure peaceful co-existence among the citizenry. He made the remarks at a day’s workshop organised by the Commission in Obuasi.

The workshop was part of the implementation of a European Union (EU) sponsored project, dubbed “Preventing Electoral Violence and Providing Security to the Border Regions of Ghana (NORPREVSEC) aimed at fighting violent extremism and radicalism.

Mr. Asamoah noted that, though Ghana has been widely acclaimed as a peaceful country, she cannot rest unless it works hard to maintain the prevailing peace.

According to him, news of violence, killings, armed robbery and various forms of crimes or social vices greet us on daily basis, which he said, are enough warning signs that the country is not immune to violent extremism.

He stated that the NCCE has identified the youth as the perpetuators of violence, with many of them being recruited to cause havoc, as experienced in neighbouring countries that have been attacked by terrorists and, therefore, stressed the need to equip young people with relevant information on violent extremism.

He stressed that Heads of institutions, the Security and leaders of religious groups who participated in the programme lends credence to the fact that the Commission is committed to work with relevant bodies to end violence extremism in the country.

DSP Martin Assenso, the Obuasi Municipal Police Commander admonished Political parties to desist from imposing their beliefs and ideologies on others and entreated them to be tolerant and accommodate divergent views and opinions.

Speaking on the theme: “National Strategy and the National Framework for Countering Violent Extremism”, DSP Assenso bemoaned the level of recklessness among the youth and observed that the youth are being used as a conduit by extremist groups to perpetuate all forms of crimes.

He assured of the commitment of the police to fight violent extremism in the country.

According to him, the Police Service is well prepared to deal with all forms of crime in the country and warned all those involved and those who are lacing their boots to refrain from criminal activities because the Police is ready to match them boot for boot.

Madam Margaret Konama, the Ashanti Regional Director of NCCE mentioned that terrorist groups such as Boko Haram and IRISH have been operating in the West African sub-region for some time now and have attacked countries such as Mali, Nigeria, Burkina Faso and it is mostly the youth that they recruit to cause these attacks. He advised that Ghanaians should learn lessons from the mayhem these groups have caused the affected countries and guard against violent extremism.

She also advocated for respect and tolerance of divergent views, saying we live in a country of different ethnic, political and religious groups, and for that matter the only way we can develop is to respect each other’s views and opinions to end violent extremism and ensure development.

The leader of Political parties present at the program made commitments to uphold the existing peace and end violent extremism, by issuing a joint communiqué.

The participants include representatives of Political parties, Heads of Security agencies, Nananom and the media, shared their opinions and views as to measures to put in place in the fight against extremism and promote unity to enhance sustainable development.

Your Thoughts in this Season