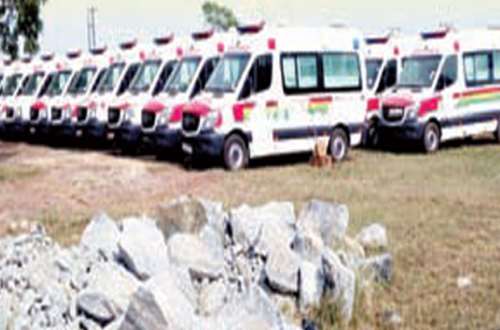 The Minister for Health, Kwaku Agyemang Manu, has praised the erstwhile Mahama Administration for being candid about the poor status of some 200 ambulances it procured from Big Sea.

Giving testimony at the Financial and Economic Division of the Accra High Court, the Minister said the former administration issued various letters to the suppliers indicating the defects on the ambulances it supplied to the country.

In one of the letters he read to the court, presided over Justice Afia Serwah Asare-Botwe, the Chief Executive Officer (CEO) of National Ambulance Service (NAS), Professor Ahmed Nuhu Zakariah, described the ambulances as cargo vehicles and not meant for paramedical purposes.

Mr. Agyemang Manu was testifying yesterday as the prosecution third witness (PW3) in the trial of the former Deputy Minister for Finance and Member of Parliament (MP) for Ajumako-Enyan-Esiam, Dr. Cassiel Ato Forson, the then Chief Director at the Ministry of Health, Sylvester Anemama, as well as the local representative of Big Sea General Trading, Richard Jakpa, for causing financial loss to the Republic of Ghana.

They have also been accused of abetment of crime and intentionally misapplying public property.

According to him, the initial comment by NAS on the inspection of the first delivery of the ambulances, which were 10 in number, was that the vehicles were not good for purpose, and that the company had changed the specifications, including other defects, and, therefore, could not serve the purpose of the Ambulance Service.

He added that the Health Ministry then wrote to Big Sea informing it about the defects that had been found on the 10 ambulances, adding that although the suppliers promised to fix the problem, it never did, but continued to ship more of the said vehicles.

The Health Minister added that although a technical team, led by the NAS CEO, went to suppliers at Dubai, Big Sea, up to date, had not supplied the missing parts of the supposed ambulances.

Meanwhile, he said Dr. Forson, on August 7, 2014, wrote to the Bank of Ghana (BoG) instructing it to establish Letters of Credit (LC) for the supply of 50 ambulances amounting to €3,950,000, representing 25 per cent of the contract sum, while arrangements were being made to perfect and sign the loan agreement in favour of Big Sea.

Similarly, he said Dr. Forson, on August 12, 2014, wrote another letter to the Controller and Accountant-General authorising the release of GH¢806,688.75  to the Minister for Health for the payment of bank charges covering the establishment of the LCs for the supply of 50 Mercedes Benz ambulances and related services.

Furthermore, Dr. Forson directed that the LCs should be charged to the budget of the Ministry of Health, contrary to the Parliamentary approval on the funding for the supply of the ambulances.

The Controller and Accountant-General, on the authority of the letters dated August 7 and 12, 2014, written by Dr. Forson, to the BoG authorised it to establish an irrevocable transferable LCs in the sum of €3,950,000 in favour of Big Sea.

By February 2015, 30 ambulances had arrived in Ghana and a post-delivery inspection revealed that they had no medical equipment, and there were other defects.

However, Dr. Abdul Aziz Bamba, lead counsel for Dr. Forson, argued that a Letter of Credit was not payment and refuted the Health Minister’s testimony that the former Finance Deputy Minister instructed the Central Bank.

Dr. Bamba stated that LCs were not payments in themselves, but guarantees or promises of payment upon certain conditions being met, but the Health Minister maintained that per his understanding the word “urgent request” was synonymous to an instruction.

Case adjourned to next week Tuesday.

ECG sensitises consumers in Ada West, East on their operations