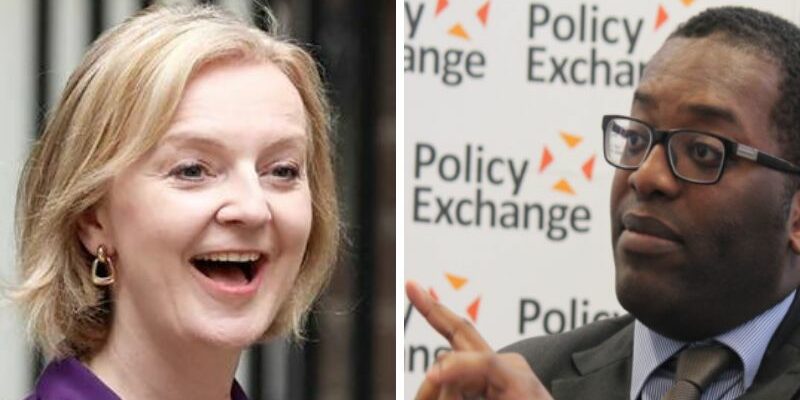 Kwarteng is the country’s shortest serving chancellor since 1970, and his successor will be the fourth finance minister in as many months in Britain, where millions are facing a cost of living crisis.

British Prime Minister Liz Truss fired her finance minister Kwasi Kwarteng, shortly before she is expected to scrap parts of their economic package in a desperate bid to survive the market and political turmoil gripping the country.

Kwarteng said he had resigned at Truss’s request after rushing back to London overnight from IMF meetings in Washington. Truss, in power for only 37 days, will hold a news conference later on Friday, Downing Street confirmed.

“You have asked me to stand aside as your Chancellor. I have accepted,” Kwarteng said in his resignation letter to Truss, which he published on Twitter.

Truss said in response: “As a long standing friend and colleague. I am deeply sorry to lose you from the government.
“We share the same vision.”

British government bonds, which have started to recover since her government started looking for ways to balance the books after the plan for unfunded tax cuts crushed the pound and gilts and drew international censure, rallied further.

Kwarteng is the country’s shortest serving chancellor since 1970, and his successor will be the fourth finance minister in as many months in Britain, where millions are facing a cost of living crisis. The finance minister with the shortest tenure died.

Truss’s own position is in jeopardy. She won the Conservative Party leadership last month by promising vast tax cuts and deregulation to try to shock the economy out of years of stagnant growth, and the fiscal policy Kwarteng announced on Sept. 23 aimed to deliver that vision.

But the response from markets was so ferocious that the Bank of England had to intervene to prevent pension funds from being caught up in the chaos, as borrowing and mortgage costs surged.

The duo had been under mounting pressure to reverse course after polls showed support for the Conservative Party had collapsed, prompting many colleagues to look for ways to force them out of office.

“The party loves the idea of principles and conviction politicians, but staying in power is everything,” one party insider told Reuters. “Ruthless can also be popular.”

Having triggered a market rout, Truss now runs the risk of bringing the government down if she cannot find a package of public spending cuts and tax rises that can appease investors and get through any parliamentary vote in the House of Commons.

Her search for savings will be made harder by the fact the government has been cutting departmental budgets for years.

At the same time Conservative Party discipline has all but broken down, fractured by infighting as it struggled first to agree a way to leave the European Union and then how to navigate the Covid-19 pandemic and grow the economy.

“If you can’t get your budget through parliament you can’t govern,” Chris Bryant, a senior lawmaker from the opposition Labour Party, said on Twitter. “This isn’t about u-turns, it’s about proper governance.”

Underlining how far Britain’s reputation for sound economic management and institutional stability had fallen, a source within the Group of Seven leading nations said G7 finance ministers at a meeting this week focused on the problems in Britain, and not the usual subject of Italy.

In Washington, Kwarteng was told by the head of the International Monetary Fund of the importance of “policy coherence”. His flight back to London was carried live by television news channels. He was fired minutes after arriving back in Downing Street.

In Westminster, Truss has been trying to find agreement with her cabinet ministers on a way to preserve her push for growth with measures acceptable to her lawmakers that would also reassure financial markets.

Rupert Harrison, a portfolio manager at Blackrock and once an adviser to former British finance minister George Osborne, said markets have now almost fully priced in a U-turn.

“(That) means if the U-turn doesn’t come markets will react badly,” he said on Twitter.

A Conservative Party lawmaker, who asked not to be named, said Truss’s economic policy had caused so much damage that investors may demand even deeper cuts rebuild confidence.

“Everything’s possible at the moment,” said the lawmaker, who had backed another ex-chancellor, Rishi Sunak, in the leadership race. “The markets have lost trust in the Conservative Party – and who can blame them?”

According to a source close to the prime minister, Truss is in “listening mode” and consulting lawmakers to gauge which parts of the programme they would support in parliament.

“It would be challenging to deliver the scale of these cuts, but for them to be credible, these need to be delivered sooner rather than in the latter part of the forecast,” Punhani said.

One key policy that is expected to be reversed is a plan to hold corporation tax rates at 19% rather than increasing it to 25% as Sunak proposed when he was finance minister under Truss’s predecessor Boris Johnson.

The latest bout of political drama to grip Britain comes as the Bank of England also prepares to end its intervention in the gilt market. Truss is the fourth prime minister in six turbulent years of British politics.

Tired of anxious and sleepless nights? It’s time to embrace the miracle of nutmeg