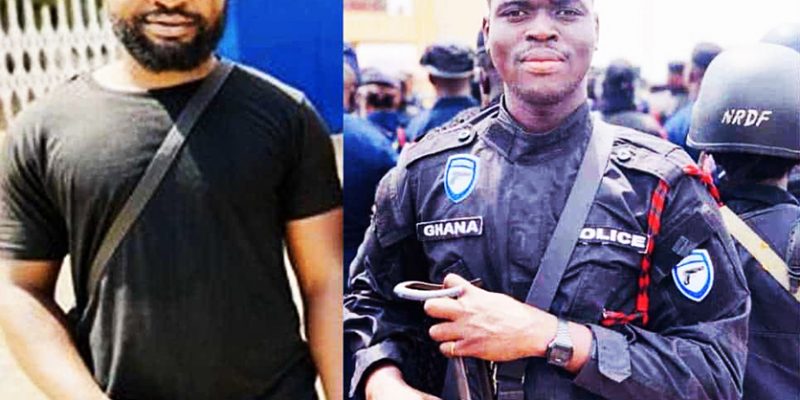 The late Pablo- prime suspect and Constable Emmanuel Osei, who was killed during the robebry

The Accra Circuit Court ‘8’, presided over by Adelaide Abui Keddey, has granted bail to six out of eight persons being tried for attacking and robbing a bullion van with registration number GT 3521-X on February 27, 2021, near Kingsway in Accra, and made away with a huge sums of money.

The six were granted bail in a total sum of GH¢500,000 with three sureties each and the guarantors are to deposit their passport pictures and photocopies of their valid identification cards (ID) with the Registrar of the court.

The first to fourth accused persons, who are General Constables – Yaro Afisu Ibrahim, Albert Ofosu, aka Cypher, Richard Boadu, aka Osor, and Rabiu Jambedu – were granted bail of GH¢100,000 each.

General Constable Nelson Tetteh and Baba Zakari, alias Rasta, a mechanic, were given bail in the sums of GH¢50,000 each, whilst the two others connected to the case are at large. The court further ordered that the accused persons are to report to the police once every other week.

Her Honour Adelaide granted the bail last week Wednesday, June 22, 2024, and the accused persons, who are facing criminal charges also at a different court, were to reappear before her on July 20, 2022.

The accused persons were said to have participated in a series of bullion van robberies within the Accra Metropolis, between February 2021 and February 2022. They have been slapped with attempted robbery and abetment, but they all have pleaded not guilty to the charges.

The brief facts of the case indicate that on February 27, 2022, the police received a report that some armed robbers had attacked a bullion van with registration number GT 3521-X near Kingsway in Accra.

Her honour was told that after the alleged robbery, the accused person fled the scenes on two motorbikes, which were waiting for them and being ridden by Constable Yaro Afisu Ibrahim and Constable Albert Ofosu.

According to the prosecuting officer, DSP Sylvester Asare, police investigations led to the arrest of Constable Reindolph Gyimah Ansah, alias Pablo, and Lance Corporal Stephen Nyame (both deceased), who both admitted the offence and mentioned the four officers, and the others at large, as their accomplices.

He added that preliminary investigations revealed that the accused persons were friends and recruit mates at the Police Training School, and together with the deceased officers after their basic training, were posted to the National SWAT unit where they underwent various tactical and specialised weapons training to equip them for certain functions, including the escort of bullion vans.

On June 14, the Circuit Court ‘11’, which is also trying the five junior officers and a civilian, threatened to strike out the case if the prosecution failed to comply with its orders to serve witness statements on the accused persons.