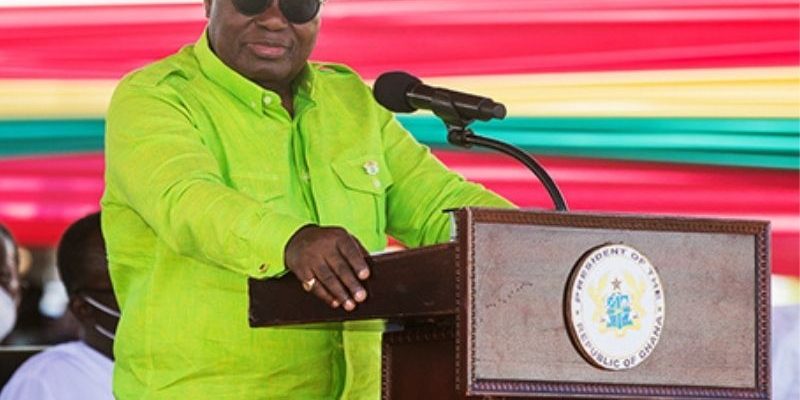 President Akufo-Addo has described the record of his government in the growth and development of the agricultural sector as impressive.

Speaking at the 35th edition of Farmers’ Day on Friday, 3rd December, 2021 in Cape Coast, President Akufo-Addo stated that his government, since 2017, has set out to transform Ghanaian agriculture through investment in integrated and mutually reinforcing measures that are yielding positive results.

With the central pillar of Government’s transformative policy being the Programme for Planting for Food and Jobs, the President stated that: “we have, through the Programme, achieved a yearly average growth of agriculture of 5.8% from 2017 to 2020, compared to the 2.7% growth we inherited in 2016.”

To date, according to him, “a total of 1.4 million metric tonnes of fertilizers and some ninety-one thousand metric tonnes (91,000 MT) of certified seeds have been made available to farmers since 2017, with the number of beneficiary farmers now hitting the 1.7 million mark, taking off from the initial number of two hundred and seven thousand (207,000) farmers in 2017.”

Through Planting for Export and Rural Development, which was launched in 2019 to promote the rapid development of six (6) strategic tree crops, i.e. rubber, oil palm, cashew, mango, coconut and shea, and thereby, diversify and augment our export earnings.

President Akufo-Addo revealed that some twenty-nine million (29 million) seedlings have been distributed to some two hundred and twenty thousand (220,000) beneficiary farmers.

Rearing for Food and Jobs, aimed at expanding domestic meat production and reducing the huge annual import bill for meat and meat products of some three hundred million dollars ($300 million), he said, has seen thousands of different livestock species being distributed to seven (7) national livestock breeding stations in one hundred and sixty-six (166) MMDAs across the country.

“Vegetable production, under the greenhouse village concept, has also been promoted intensively, with three centres established at Dawhenya, Akumadan and Bawjiase for commercial production and training of youth interested in establishing agribusinesses in the vegetable value chain,” he said.

President Akufo-Addo added, “To improve the efficiency of farmer operations, a total of eight thousand nine hundred and eighty (8,980) units of various machineries and equipment have been imported to enhance access to mechanisation services by farmers. Sixty-three (63) out of the proposed eighty (80) one thousand metric capacity (1,000MT) warehouses have been completed.”

This, he indicated, has increased the warehouse capacity owned by Government to ninety-seven thousand metric tons (97,000 MT), with additional warehouses set to be constructed to handle the expected increased production of grains to enlarge storage, and reduce post-harvest losses.

On irrigation, the President stated that: “the result of significant investment by my government in the Ghana Commercial Agriculture Programme has resulted in the availability of a total of thirteen thousand, one hundred and ninety (13,190) hectares of additional irrigable land, through the rehabilitation of Tono, Kpong Left Bank and Kpong Irrigation Schemes for rice and vegetable cultivation.”

To address the perennial challenges of access to credit for our farmers and fisherfolk, the President stated that the Ghana Incentive Based Risk Sharing Agricultural Lending Scheme (GIRSAL), which was established in 2019, has approved and issued credit guarantees for agricultural loans to the tune of two hundred and seventy-three million cedis (GH¢273 million).

On reviving Agricultural Extension Services, President Akufo-Addo noted that Government has increased the staff strength from of the Services from 1,580 in 2016, to 4,280, following the recruitment of 2,700 more extension officers in 2019.

“I am happy to inform you that approval has been given by Cabinet for the recruitment of an additional number of one thousand, one hundred (1,100) veterinary officers into the Ministry of Food and Agriculture. Fifty percent (50%) of this number will be recruited in 2022, and the remaining fifty percent (50%) progressively taken on board over a two-year period,” he added

Construction works on fishing landing sites and harbour projects, located in the Greater Accra, Central and Western Regions, President Akufo-Addo said, are progressing steadily, with the projects expected to facilitate the transformation of the fisheries sector, by providing modernised berthing, handling, processing and mechanisation facilities to fisher folk.

Cabinet, according to the President, has granted approval for the procurement of a research vessel and four (4) patrol boats for the fisheries sector, with the four (4) patrol boats set to strengthen enforcement capacity, to help address the issue of overexploitation and overfishing, as well as help curb the pervasive incidence of Illegal, Unreported, Unregulated (IUU) fishing.

On cocoa, President Akufo-Addo stressed that the sector has seen significant transformation since 2017.

This, he said, has been made possible by the introduction of productivity improvement techniques that ensure higher yields from the same acreage, the adoption of technology and practices that modernise cocoa production in an environmentally, socially and sustainable manner, the design of policies to address the inequalities in the international marketing system of cocoa by paying a Living Income Differential of four hundred United States dollars ($400) per tonne of cocoa to farmers and the fostering of partnerships and collaborative actions of stakeholders towards greater investments.

President Akufo-Addo told the gathering that the commencement of the provision of a pension scheme for farmers started in 2020 under his government, even though the law was promulgated in 1984, with successive governments being unable to bring it into being.

“The pilot pension scheme has, initially, covered some two thousand, eight hundred (2,800) farmers in the New Edubiase Cocoa District of the Ashanti Region, and a nation-wide registration of all cocoa farmers is on-going under the cocoa management system to speed up the process,” he added.

Gov’t must do broader consultation on e-levy –Send Ghana