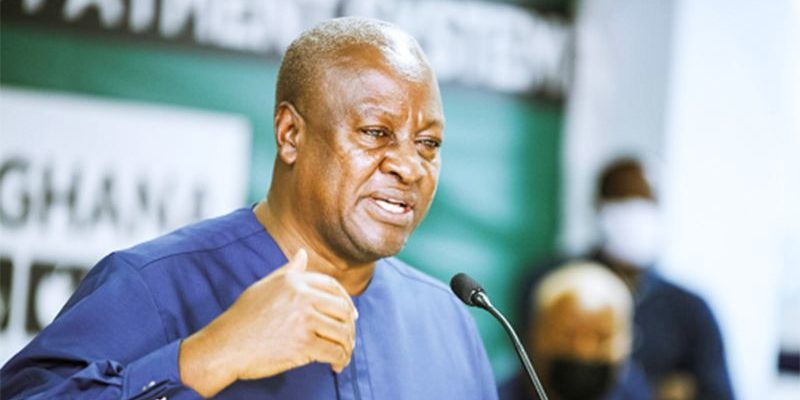 The former President, John Dramani Mahama, has hinted that the opposition National Democratic Congress (NDC) would approach the 2024 general elections with its “own referee.”

According to the two-time defeated presidential candidate of the umbrella family, the NDC has learnt its lessons from the 2020 polls and has resolved to rely on its own fate.

Mr. Mahama stated, this week, in an interview with Voice of America (VOA) that a democratic country requires a sufficiently independent electoral commission, but Ghana does not have one.

“So, a lot of things went wrong. We have done our post-mortem. We realised that we have to go into the ring with our own referee,” he asserted.

AZUMA NELSON COMES TO THE RESCUE

When pressed by the interviewer on what he meant by that statement, the eloquent communicator and historian, after a brief pause, managed to cite how there was no space on the pink sheet to record the number of people verified biometrically.

He later said he made the statement “…going into the ring with our own referee” as a metaphor, because of a boxing bout that former World Champion Azuma Nelson had with Jeff Fenech in 1992 in Australia.

Azuma had stated that his referee would be his gloves, so once he knocked down the opponent, the fight had been decided by him.

“It means we must take advantage of the systems that are given to political parties to police the poll. And so, it means that we must be extra vigilant at the polling station level, at the collation level and at the final tally level.

“We are going to be much more vigilant than we were in the past. You expect that the Commission is neutral, so there are some things you take for granted, but this time we are not going to take anything for granted,” he cautioned.

The premises for his statement was the 2020 general elections, which the NDC took to court, but suffered a humiliating defeat.

For the first time, however, the NDC, through Mr. Mahama, explained the rationale behind the party not adducing a single pink sheet as evidence in their election petition.

According to him, it was because the pink sheet did not make allowance for the number of people that were biometrically verified.

He continued that it was only when you had the recording, which must match up with the number of ballots in the box, that you had a case to pursue.

“And so, if the Electoral Commission gives you a form that does not make provision for people verified, then what is the need for us putting our fingers on that verification machine?” he quizzed.

NO CONFIDENCE IN EC

Mr. Mahama added that the NDC could no longer have confidence in the current Commission because in the party’s estimation, the EC is not “sufficiently independent and neutral because of certain things that have happened.”

Mr. Mahama cited that the NDC has withdrawn from the Interparty Advisory Committee (IPAC) because the current Electoral Commission has stated that decisions made at IPAC are only advisory.

Mr. Mahama further noted that there have been moves by the Ghana Peace Council to bring the NDC back to IPAC, but the EC is dragging its feet.

Meanwhile, former President John Mahama says he has not decided whether he will lead the opposition NDC in the 2024 elections, stating that the party is yet to make that decision in 2023.

“A decision would be taken early next year in the first quarter; that’s when we hold our party’s primaries for the presidential candidacy and we’d see,” he added.