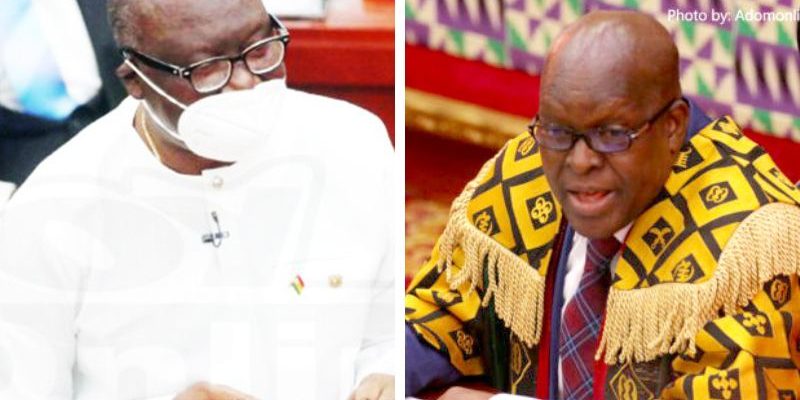 The Speaker of Parliament, Mr Alban Sumana Kingsford Bagbin, has applauded the Finance Minister for ensuring that many lives were not lost to Covid-19 due to the expenditures government made.

He, however, noted that Parliament must exercise its oversight duty of protecting the public purse and has, therefore, directed the Finance and Health Committees of Parliament to probe into the utilisation of the Covid-19 funds.

“Definitely, I know, without those funds I don’t know how many of us would have been alive now. We are lucky as a House that 275 of us survived. We lost some good number of Ghanaians, which is quite painful, but at the end of the day, we performed far better than many countries in the world.

“…And so some work has been done, but that does not justify that we should not perform our function of ensuring that the money was utilised efficiently, effectively and economically.”

His directives follow calls by the Minority for the need to set up an adhoc committee to probe the utilisation of the Covid-19 funds, after the Finance Minister had spent about 30 minutes to render account on the Covid-19 expenditures in the House yesterday.

Mr Ofori-Atta, in his submission said that government was able to mobilise GH¢19.3 billion in 2020 from various funding sources. He stated that out of this money, an amount of GH¢12 billion was utilized, while the remaining GH8.14 billion was programmed to provide for shortfalls in revenue.

He said the monies were expended on providing support to households, supply equipment and provide relief to health workers, provide  health Infrastructure,  security operations, evacuations, quarantines and coordination, as well as economic relief, stabilisation and revitalisation and Covid-19 complementary releases.

But the Minority Spokesperson on Finance, Mr Ato Forson and the Minority Leader, Mr Haruna Iddrisu all pointed out to the Speaker that there were gaps in the account that was rendered by the Minister and the need for a further probe by an adhoc committee.

Although these arguments were countered by the majority side, the Speaker, in response stated that indeed there were some discrepancies in the accounts that was rendered.

He first of all pointed out that the Minister did not give any expenditure made in 2022 with regards to Covid-19 because he is aware some expenditure are still being made.

He also stated that there should be clarity on whether or not monies from the National Covid-19 Trust Fund and the Ghana Private Sector Covid-19 Trust Fund were paid into the Consolidated fund because those monies qualify as public funds based on article 175 of the 1992 constitution.

He said if those monies were not paid into the Consolidated Fund, then the Ministry cannot be made to account for it, but rather the Trust, hence the need for a further investigation.

“From the statement, one cannot tell whether it was paid into the Consolidated fund or it was received by the Trust and kept by the Trust and the Trust itself was expending it. And so we need to go beyond the Minister and to get in touch with the Trust to be able to unearth these things and therefore there is need for further investigation.

“It is with this that I  direct that the Committee of Finance ably supported by the Committee of Health should investigate and inquire into the total receipt, referred to as Covid-19 funds, and how those funds were applied for the betterment of the people of this country.”

He also responded to those insisting that the investigation of the utilisation of the funds must be done by the Auditor General (AG) and not Parliament.

According to Speaker Bagbin, investigation is different from auditing, hence the need for parliament to investigate into the utilisation of the funds.

“And so we cannot say that because the AG is going to audit accounts, Parliament is disenabled from going into, by way of investigation and inquiry into the utilisation of Covid-19 funds.”

He also indicated that it was in the Minister’s own interest that he briefed Ghanaians on the use of their taxes in order to allay their fears.

“…But to urge him that it is in the interest of  the Ministry and the government for the people of Ghana to always constantly be informed about tax monies…There is no witch-hunting in these matters. It is one of the very effective tools of good governance,” Speaker Bagbin said.

He urged the Committee should expedite work on the investigation and do well to invite all the relevant people needed to aid their work. He said the Committee should get the detailed expenditures of the monies that were released to Ministries, Department and Agencies to work with during the pandemic.

Ken Ofori-Atta Statement To Parliament On The Covid-19 Expenditure