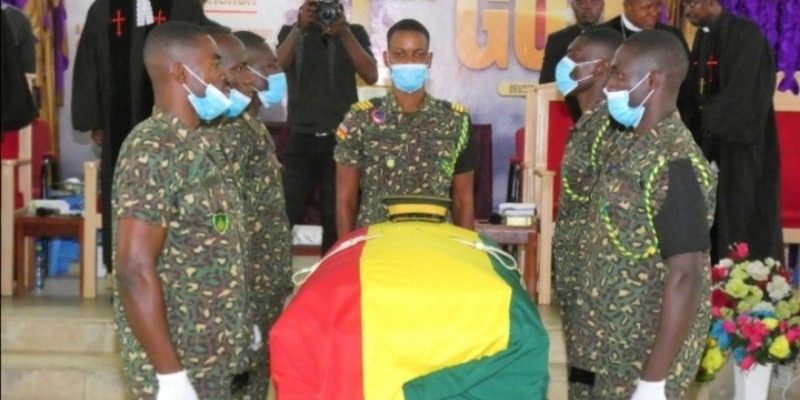 Body of slain Immigration officer about to be carried away 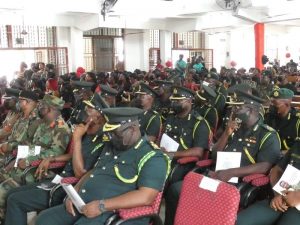 The 24 years old slain Immigration Controller Officer (ICO), Michael Ekow Otoo, who met his untimely death during a national assignment, was laid to rest over the weekend.

The Officer was attacked by alleged smugglers at Kokoligu in the Upper West Region, whilst on special duties at Hamile border on 22nd March 2022.

Addressing the gathering at the funeral, the Head of Religious Affairs at the Ghana Immigration Service (GIS), Rev. Michael Baakwaw, urged all and sundry to do what was right whilst they were strong, as death was bound to happen.

In a funeral sermon, the GIS Head of Religious Affairs admonished the gathering to “do what is right while you are strong and alive, for when you die, you can’t do all that; tomorrow is not promised; seek ye first his righteousness, and all other things shall be added unto you.”

He stressed that the youth should use their time wisely, and not engages in worldly activities, because a time would come where they would be held accountable for their actions today.

Rev. Michael Baakwaw also bemoaned the fact that the young ones do not adhere to instructions from the elderly, due to what they were exposed to in the world of today, which had affected their religious lives.

The Head of Public Affairs, Chief Supt. Michael Amoako Atta, used the opportunity to advice individuals who wanted to join the Immigration Service, but due to the untimely death of Michael Ekow Otoo wouldn’t want to peruse the course, to make up their minds.

Chief Supt. Michael Amoako Atta explained that “our (GIS) job is one that throws us out there to miscreants and people with evil intentions, so, definitely, your life will be in danger, but for the love of the country and patriotism, we want to serve our nation where we are posted to do so. If you want to join us, know that death is a necessary evil that will come in the line of duty, so you have to make your mind.”

The Head of Public Affairs encouraged those in active service to continue doing their work diligently, adding that measures have been put in place to protect those on duty from any unfortunate incident. He revealed that a slot has been left for the family to bring a capable individual in the next recruitment, to replace the slain officer and reinstated that investigations are underway to arrest the perpetrators.

Some dignitaries who were present at the burial ceremony were; Lawyer Kwame Asuah Takyi, the Comptroller-General of GIS, Major General Peter Nicholas Andoh, Deputy Controller General in charge of Finance and Administration, Isaac Owusu Mensah, Assistant Greater Accra Regional Commander among many others.

By RICHARD OWUSU-AKYAW4 days ago0
Ashanti