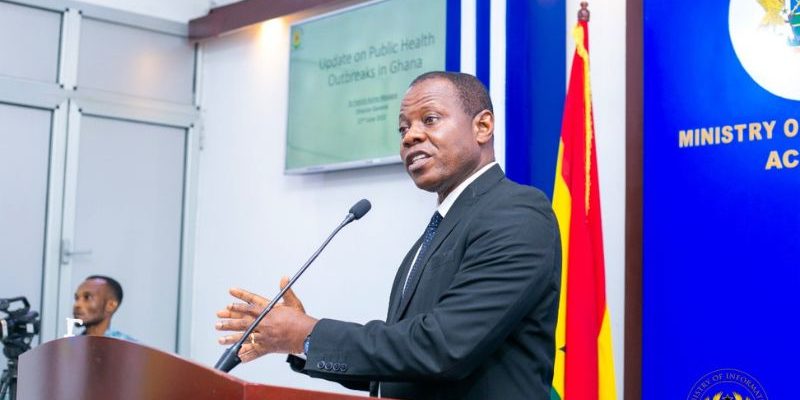 The Director General of the Ghana Health Service (GHS), Dr. Patrick Kuma-Aboagye, says there were more monkey pox cases being recorded in the country. According to him, the number has jumped from twelve suspected cases to 72 over the last two weeks, and noted that out of this 72, 18 had been confirmed to be positive.

Dr. Kuma-Aboagye, who made these revelations at a press conference in Accra yesterday, also noted that the Greater Accra Region was currently the hotspot for the outbreak, but added that three other regions, namely Ashanti, Eastern and Bono, had also recorded cases. He specifically mentioned Ayawaso Central in the Greater Accra Region as the district where the cases could be found.

He indicated that it was still too early to develop a vaccine that could cure this disease, hence, pleaded with the public to guard their health well. Yesterday’s briefing was also used to debunk news of an Ebola outbreak in the country. Reports had it that there had been an outbreak of Ebola in Tamale in the Northern Region.

But, speaking on the issue, the GHS Head said that the Service was rather conducting a simulation exercise on how to handle the disease should an outbreak occur, hence, advised people to disregard the news. Dr. Kuma-Aboagye also used yesterday’s presser to appeal to Ghanaians to return to the wearing of nose mask. He said his appeal was a result of the recent upsurge in Covid-19 cases. He also revealed that the new recorded cases had moved from 400 in May to 2,528 in June.

He said this recent upsurge was driven by the omicron sub-lineage BA.4 and BA.5.

He noted that schools and work places had been the most affected groups of people, and said about 13 schools had recorded an outbreak and some of these had gone ahead to shut down temporarily.

He indicated that the GHS would not want to recommend to the President to make the wearing of nose mask mandatory, as it used to be when the pandemic was severe. He said the GHS wanted the public to cultivate the habit of wearing the mask on their own without being forced to do so, hence, would not make it mandatory.

He, henceforth, appealed to Ghanaians to cultivate the habit of wearing the masks to protect themselves from being infected. Aside the wearing of nose mask, the GHS Director also appealed to people to observe the other safety protocols, such as the washing of hands and ensuring enough ventilation at enclosed places.

Aside observing the protocols, Dr. Kuma-Aboagye also appealed to people to get vaccinated.

He noted that the Service is witnessing some improvement in the number of people who are going in for the vaccines. He observed that two weeks ago, the number stood at 15.8 million, but noted yesterday that the number had jumped to 16.7 million.

Dr. Kuma-Aboagye said that despite this increase, there are a good number of people out there who are yet to take the vaccine and appealed to them to do so.

He said the country does not have a challenge with vaccine availability as it used to have and revealed that the country has total number of 7.4 million vaccines in stock.

He therefore pleaded with those who still have some misconceptions, myths and doubt about the vaccines to do away with them and get vaccinated.