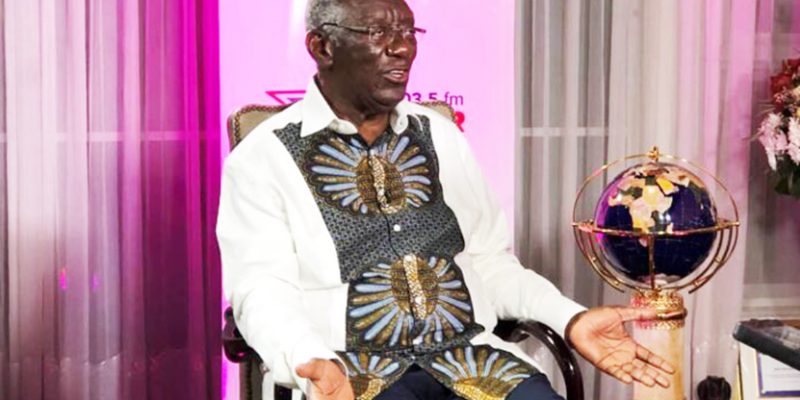 Former President John Agyekum Kufuor has denied reports circulating on social media that he has endorsed a particular candidate to lead the New Patriotic Party (NPP) into the 2024 elections. In a statement issued by his office, the former president said he had not made such endorsement and called on the public to disregard the claim.

The following is the full statement;

The attention of the Office of Former President John Kufuor has been drawn to an erroneous reportage in some sections of the media, especially on social media, to the effect that President Kufuor has endorsed an aspiring candidate for the NPP flagbearership over several others who have expressed interest to contest in the race.

This Office wants to emphatically deny that any such endorsement took place on the said occasion and bemoans the fact that what transpired has been seriously misconstrued.

Former President Kufuor and Vice-president Dr Mahamudu Bawumia were both guests of honour at a Father’s Day soiree that was organised by the Peduase Valley Resort and Hotel last Sunday, June 19, 2022 at the hotel premises. The MC for the occasion was Mr Kwame Sefa-Kayi, who stated that when the Vice-president was invited the day before, he was on assignment in the North and appeared unable to be present. He continued that when Dr Bawumia was told that former President Kufuor would also be in attendance, he is reported to have said that: “if it is Kufuor, then I will surely come.”

In his remarks, the former President shared how touching it was to him to hear what the Vice-president was reported to have said. The occasion being a Father’s Day event, President Kufuor commented on the father-son relationship between him and the MC, Kwame Sefa-Kayi, Mr Ibrahim Mahama and the Mamfehene who were also in attendance. He also reminisced the close father-son relationship between him and Dr Bawumia and elaborated on how the Vice-president was only one month one day younger than his (Kufuor’s) eldest child, John Addo Kufuor. For this reason Mr. Kufuor continued that he had always been close to the Vice-president and treated him like a true son. There was nothing political about his remarks or even the occasion.

President Kufuor wants people to know that the other much talked-about prospective NPP flagbearership candidates like John Alan Kyerematen, Boakye Agyarko, Joe Ghartey and Dr Owusu Afriyie Akoto all have close relationships with him. Of course Dr Akoto is his younger brother. The former President believes that any of those mentioned, when selected by the party to be the flagbearer, would be able to discharge the work of the flagbearer very firmly and effectively.

In the upcoming NPP Flagbearership race, in order to achieve party unity and sustain it thereafter, for victory of the party in the 2024 elections, what President Kufuor expects from the party and political hierarchies are fair and un-engineered systems and processes that would lead to a fair selection of our next NPP flagbearer. This should be devoid of coercion and machinations so that the eventual selected nominee, coming out of the uncompromised freewill of the voting, delegates can easily command the support and respect of all party faithfuls and indeed other Ghanaians sympathetic to our cause, towards ‘breaking the eight’.

Okudzeto was not truthful with his claim against Akufo-Addo; Arhin