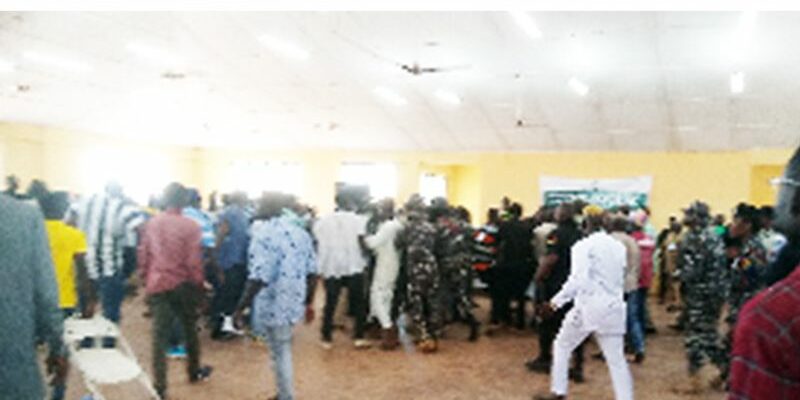 Pockets of violence characterised the internal elections of the largest opposition party, the National Democratic Congress (NDC), disrupting what should have been a rather smooth voting exercise.

The elections, which took place from Friday to Saturday, through to Sunday across the country, recorded chaos at some voting locations.

Reports indicated that there were misunderstandings at voting centers at Nalerigu Senior High School and on the campus of Kwame Nkrumah University of Science and Technology (KNUST) where gunshots were fired, which resulted in a near stampede

People run helter-skelter for their dear lives when five protracted gunshots were fired by the police in self-defence.

The police had arresteda ‘machoman’, who allegedly slapped a police officer at the main entrance to the event.

A group of 10 heavily built men had gone in to rescue their colleague but the police fired the warning shots to disperse them while the police whisked the arrested machoman away. There was, however, no record of injury neither did the incident affect the voting process which was going on smoothly.

Earlier polls at the KNUST were delayed partly as a result of a court injunction placed by some aggrieved members of the Manhyia Constituency.

According to reports, after the regional chairman aspirant, Lawyer Evans Amankwa intervened to settle the dispute, another one erupted.

This time, the Elections Committee Chairman, Alhaji Nurudeen Hamidan announced, according to reports, that TEIN delegates could not participate in the election.

The announcement followed concerns about the inclusion of some delegates who were allegedly not qualified to vote, a decision that created chaos at the voting centre, which was to elect youth and women Organisers for the umbrella family in the region.

In a media interview last Saturday, a deputy Director of the NDC’s legal team, Baba Jamal, said all the outstanding issues had been resolved to make way for the party to elect new regional executives yesterday.

He added that “For Manhyia South, there was an application for an injunction that was served on us, but the issue has been resolved and elections have been held. We had issues with the youth organisers and TEIN list.

“The National Executive Committee put together a three-member committee and gave us a list of 34 delegates. That is the approved list [of TEIN].”

He further mentioned that the Women’s Organiser polls were put on hold, pending solution to certain concerns raised by some aggrieved candidates and party members.

“For Asawase, there were two opposing injunctions and we are consulting Accra to resolve them… Unfortunately, we don’t have the approved list from Accra for the women’s organiser elections.

“When the committee did the accreditation, it should have brought their list, but unfortunately, we don’t have that. So, that election has been put on hold so that we can have the accredited list to run the election,” he said.

The disagreement of the irate delegates, after the leadership of the NDC in the region had made the announcement led to chaos.

Some candidates wanted the TEIN executives to be removed from the voter list, which sparked a brawl between supporters of the chairperson candidates.

The voting process halted as the centre turned chaotic, with some of the angry supporters attacking each other, until the police brought the tensed atmosphere under control.

A total of 223 delegates cast their votes to choose new regional executives for the NDC in the North East Region.

The internal elections of the opposition NDC over the weekend saw some incumbents lose to new entrants.