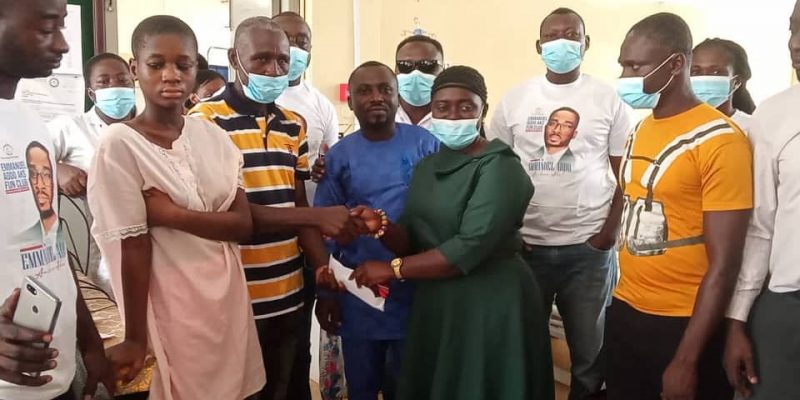 The Emmanuel Addo Fan Club has paid the full cost of the hospital bills for Doris Yonyeh, a 14-year-old student of Krobo Junior High School Form Two student in the Afigya Kwabre South District of the Ashanti Region.

She suffered a brain tumor and received treatment at the Konfo Anokye Teaching Hospital (KATH) in Kumasi, but was detained for one-and-a-half months after being discharged, till Mr. Emmanuel Addo, Founder and President of the Fan Club, got wind of the plight of the little girl.

Mr. Simon Karikari, Chairman of the Club, took it upon himself to foot the bill with other interventions to all patients at the D2A (ENT) Ward at the cost of GH¢5,000.00.

He said he was informed about the girl’s plight by the Headmistress, Madam Doris Oti, who had since been given the amount for payment to the hospital.

Mr. Yonyeh, father of the girl, expressed his profound gratitude to the Fan Club for the timely intervention, which had given the family some relief.

He entreated corporate and civil organisations to emulate the shining examples of Emmanuel Addo Fan Club to bring smiles to other needy families and individuals.

Mirinda Melody Boadiwaa, Principal Nursing Officer at D2A Ear Nose Throat (ENT), on behalf the hospital commended the Fan Club for the kind gesture to Doris Yonyeh, and urged them to keep on with the good work in serving mankind, especially the less privileged and the needy in society.

We are more than qualified to break the 8 -Nsiah Asare