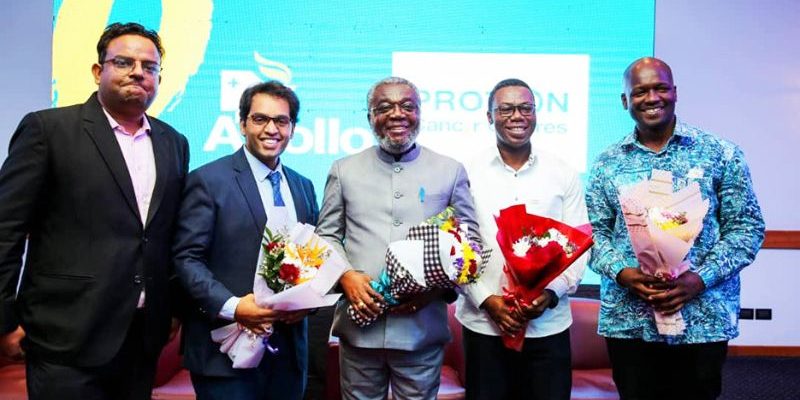 Michael Yaw Asamoah, a man in his 30s and father of a toddler, has narrated the physical and emotional ordeal he went through after being diagnosed with brain tumor. He said the tumor affected his vision, productivity, confidence and balance.

Michael said his difficulty was with how the news was broken to him at a Ghanaian health facility, which was more traumatising than the cancer itself.

Per the information handed to him, the tumor was located somewhere in his brain, which cannot be operated upon.

Meanwhile, the tumor has caused condensation of water at part of his brain, which was having severe impact on his eyes.

It was during this difficult moment when he thought death was inevitable, that a doctor in a local health facility urged him to seek help from India, at Apollo Hospital.

With support from Tobinco Foundation, he went to India and the reception Apollo Hospital gave him on his first visit formed a greater part of his healing process.

Michael is back to his normal life in Ghana and is expecting his second child. His experience in India has made him to insist on the government to equip the various public hospitals in the country with modern medicines.

He told journalists in Accra during a visit by the Apollo Hospitals Enterprise Limited team to Ghana on Thursday that the difference between Ghana Healthcare and India is modern equipment.

According to him, it would not be fair on the part of Apollo to drive Ghanaians to seek health care in India, when it already has facilities and personnel to attract health tourism.

He said only few patients can afford the huge money involved in traveling outside to seek medical treatment, hence the need for collaboration to build local capacities.

“The country has modern hospitals with infrastructure that can start this type of treatment. Building the capacity of our local health workers [means] you are also giving quality treatment to the patient.

“A few patients can pay the amount of money which is leaving the West Africa sub-region for medical treatment outside. It is huge and Ghana as a country wants to put ourselves in a situation where we will take advantage of medical tourism. We cannot start from the scratch, but we will begin from where others have reached. I want to challenge them (Apollo) to come and set up here.”

He believes interventions such as this raises the bar in the health sector, since private sectors participation in health care is almost negligible in this country.

“I want to see the private health sector competing over the employment of health professionals so that we will have choice were you want to be.”

Apollo’s Deputy General Manager for international Marketing, Amit Chaturvedi, in response to the call said the message has been taken in good faith, but would begin by supporting patients on how to access care from their facility.

He said information centre would be opened in Accra to support patients requiring, especially cancer treatment from India.

He explained that proton therapy is a radiation therapy that uses tiny particles called protons as excellent cancer cell killers. Protons deliver their energy, but do not damage healthy tissue in comparison to photon therapy. Therefore, a higher dose of radiation can be targeted at the tumor without affecting many normal healthy cells.

Proton therapy has saved the lives of Michael and others because it can be effective in treating many types of tumors, including tumors of the brain, head and neck, central nervous system, lung, prostate, and gastrointestinal system.

Proton therapy is often the preferred option for treating solid tumors in children because protons can be controlled precisely so there is less radiation to normal tissues, helping prevent serious complications and lessening the chance of secondary tumors.

By admin5 hours ago0
General News

By admin5 hours ago0
General News