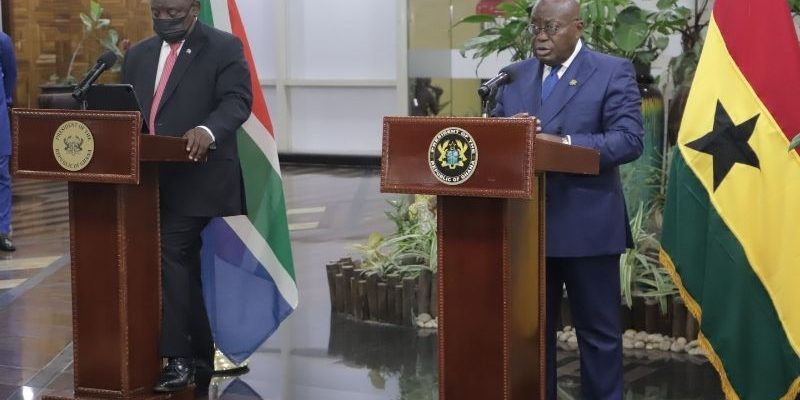 President Akufo-Addo addressing a press conference. at the Jubilee house. With him is Mr Cyril Ramaphosa, South Africa.

The presidents of the republics of Ghana and South Africa have descended heavily on the Western world for over what they have described as unfair treatment being meted out to Africa over the detection of the new COVID-19 variant, Omicron.

According to the two leaders, the least the wealthy nations could do for Africa was to hail her smartness and competence in detecting the variant and informing the world. South Africa, whose scientists discovered the Omicron, is among other African countries banned from traveling to the US, UK, and EU.

Addressing a joint media briefing at Jubilee House on Saturday, December 4, 2021, the two presidents condemned the decision, whilst taking it as a lesson to be self-reliant.

In his brief, President Akufo-Addo said that Ghana joins the other African countries in repeating their firm opposition to all attempts to single out the continent for the imposition of travel bans as instruments of immigration control.

He said the position to oppose the ban stemmed from the fact that the Omicron variant of COVID-19, which was recently sequenced and reported by South African scientists, was discovered much earlier in the Netherlands.

President Akufo-Addo indicated that he exchanged views and information with President Ramaphosa about the common fight against COVID-19.

It was the belief of President Akufo-Addo that vaccine politics should cease to ensure that all over the world, there was enough to vaccinate everybody.

In Ghana, while, he said, the government was working to manufacture its own vaccines, and that about six million of the population had been inoculated, a number, he said, was way too low, and urged all to get vaccinated.

He reiterated Ghana’s unflinching support for South Africa and, indeed, for all the African Countries in their common search for an end to the pandemic.

The President told the media that the purpose of the visit by the South African President is to re-affirm the ties of cooperation and the bonds of friendship between the two countries, with the two leaders discussing at length how to boost further political and economic relations, cultural and people-to-people exchanges, as well as co-operation at the continental and multilateral levels.

Their deliberations also centered on driving investment opportunities, domestic and foreign, into both countries; the realisation of the 17 Sustainable Development Goals (SDGs); and the need for enhanced cooperation and partnership in the areas of education, trade and industry, agriculture, defence co-operation, immigration, environment, science and technology, petroleum and hydrocarbon activities, and tourism.

President Akufo-Addo reiterated that “Ghana will make sure that Africa’s voice is heard loud and clear in the deliberations of the UN Security Council and will consult broadly to define Africa’s interests.”

“With the continent confronted by multiple threats to the territorial integrity of some of its states and many of its civilian populations being put under serious threat, President Ramaphosa and I both agreed that now is not the time for the Security Council to reduce its peacekeeping mandates on the continent,” he added.

President Akufo-Addo applauded President Ramaphosa for the efforts he was making to consolidate peace in the Southern African Development Community (SADC), with the ongoing SADC mission to crush the violent insurgency in Mozambique’s northern province of Cabo Delgado, in which South African troops were playing a leading role.

Concluding his address to the media, President Ramaphosa, who appeared unhappy with the travel ban, thanked President Akufo-Addo for the “show of solidarity,” and for granting the state visit.

President Ramaphosa described the ban as a “slap in the face” of not just South Africa, but African excellence in scientific endeavours.

He said: “It was an African scientist who detected this variant and who alerted the world.” Instead of the world applauding the scientific excellence of an African country, they have decided that they should punish the country where this excellence emanated from.”

He observed that the arbitrary travel ban was already causing substantial damage to the national economies of the countries affected.

In particular, he said countries that were most reliant on tourism were facing enormous devastation.

He agreed with the United Nations’ Secretary General, Antonio Guterres, who had said the ban was “a travel apartheid” imposed on Africa.

As part of the visit, there was an inaugural session of a bi-national commission for Ghana-South.

The commission would oversee bilateral relations between the two countries, including governance, trade, and industry.

As part of the visit, some agreements in the areas of agriculture, gender, transport, and manufacturing were signed.

President Ramaphosa was pleased and impressed by the cultural heritage of the Ghanaian people after visiting the Ashanti Region for the 50th celebration of Nana Otuo Sriboe II Jubenhene.

He said he was deeply moved and impressed to see how Ghana had continued to keep true to the traditions of the old, traditions that span generations and generations.

President Ramaphosa indicated that “I will go back to South Africa with vivid memories of people who are together in a very peaceful spirit celebrating, and I was truly honoured and humbled that you took me to see the wonders of Ghanaian culture and tradition.”

By RICHARD OWUSU-AKYAW4 days ago0
Ashanti