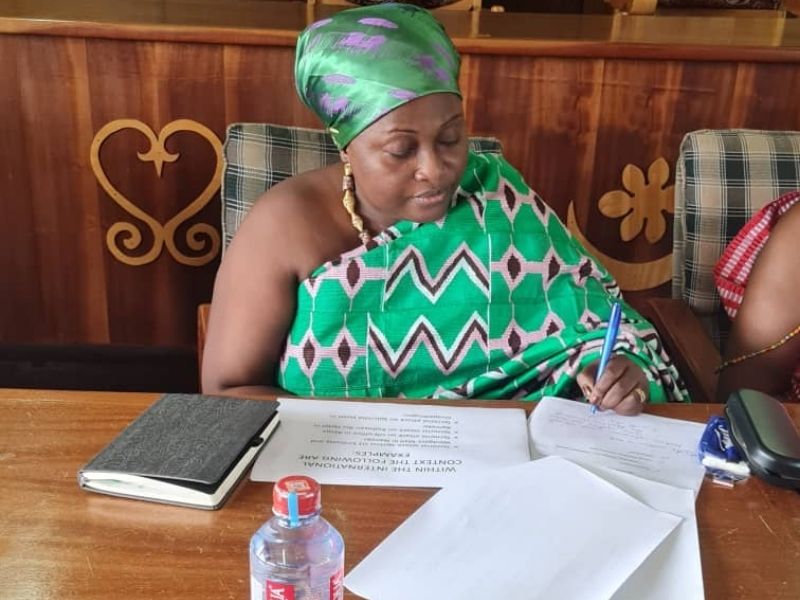 Queenmothers in the Bono Region have been educated on their roles in governance, and also to enhance their knowledge and understanding of participatory democracy.

The education was further to enable the queenmothers to sensitise their communities on issues of national interest, such as peace and cohesion.

The sensitisation programme, held at the Bono Regional House of Chiefs Secretariat, was under the theme; “National Cohesion and Inclusive Participation in Governance: The Role of Queenmothers.”

It was championed by the President of the Bono Queenmothers, who doubles as the Queenmother of Drobo, Nyansabuakwa Yaa Ansuah II.

Delivering the welcoming address, the Deputy Bono Regional Director of the National Commission on Civic Education (NCCE), Mr. P.K. Gyasi, noted that the issue of national cohesion, peaceful coexistence, and inclusive participation in governance was of prioriy importance to Ghana as a nation.

“The issue of national cohesion, peaceful coexistence, and inclusive participation in governance is of prior importance to Ghana as a nation,” he said and added that it is for that reason why the commission is to equip citizens on their rights, duties and obligations to ensure peace at all times.

Touching on the need for peace and national cohesion, Mr Gyasi stated that development can only take place in an environment of peace and unity as well as inclusive participation in governance.

“Development can only take place in an environment of peace and unity as well as inclusive participation in governance, ” he said, adding that “To achieve this role of queen mothers cannot be underestimated”.

Addressing the queen mothers, Nyansabuakwa Yaa Ansuaa noted the participation of Queen Mothers in local governance in Ghana has gone through various spheres with different forms of regime arrangements.

“In spite of this exclusion, traditional leaders have refused to be perturbed and continue to serve their people”, she observed.

Nyansabuakwa Yaa Ansuaa said Queen Mothers have enormous potentials that ought to be harnessed through training and integration into the mainstream local governance system for the benefit of the communities within their respective jurisdiction.

She therefore encouraged her fellow queen mothers to take advantage of such capacity workshops and enhance their leadership skills to rally their people for development.

The nineteen (19) paramount queen mothers and some other divisional queen mothers from across Bono Region who attended the program thanked Nyansabuakwa Yaa Ansuaa for the workshop towards nation building and called for more of such engagements.

Kanye West shocks fans after he shaves off eyebrows